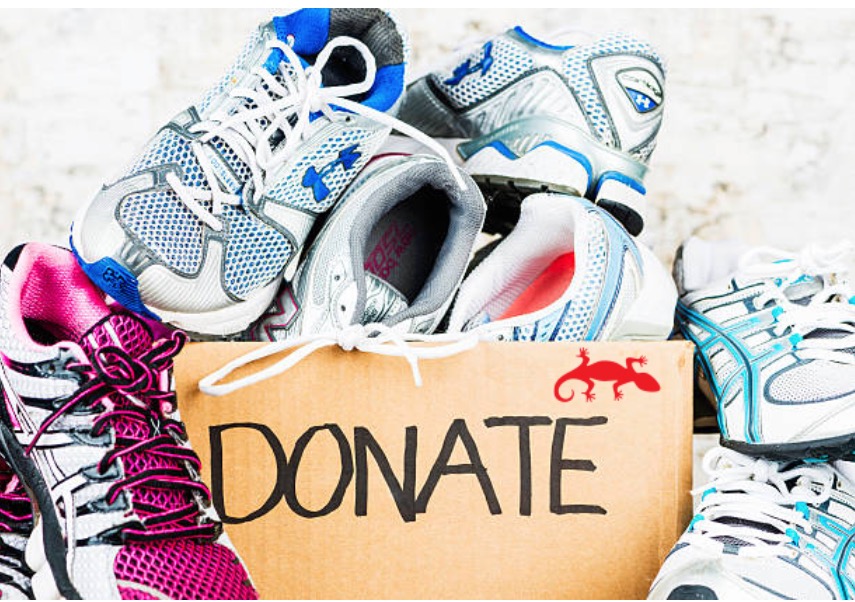 Most of us probably don’t know, but as someone who’s been forced to transition (mostly) from running to walking and hiking, I can tell you it’s a lot. I still run a bit, and walk 40-50 miles a week, and I probably use up only two or three pairs of shoes a year that way, because walking gives you much more shoe life than running.

What’s the relevance to TRL, you might ask? Well, since 2014, we’ve been collecting shoes for the homeless, and to date we’ve collected a whopping 3,271 pairs. If they have only two-thirds the walking life left in them that I’ve gotten out of my own shoes, that’s enough for a staggering 1,500,000 miles—enough to walk to the Moon and back three times over.

What’s needed are wearable/walkable shoes. That’s different from “runnable shoes.” Shoes that are dead for running can still have hundreds of miles of walking in them, and for people who can’t afford new shoes, that’s an enormous blessing.

If you think your shoe is too decrepit, it probably isn’t. Not unless the sole is literally falling off. We can use boots, dress shoes, walking shoes, children’s shoes, sandals—pretty much anything (including good-condition spikes, which we can pass on to a high school team). Really good-condition running shoes go to the same high school team.

Historically, most have gone to Operation Nightwatch, which runs a foot-care clinic in which, in addition to free health care, they distribute shoes and socks. Because they operated indoors, however, Covid interfered, and other charities have been taking up the slack. “Today I took some to the Francis Center, which serves homeless people in the outer Southeast, from its location on SE 82nd,” says David Groff, who since 2014 has been the person who took the shoes we provided and gotten them onto needy feet.

“They were overjoyed to receive the shoes,” he adds. “The volunteer who accepted them said that sometimes they get shoe donations that are not practical, but the Red Lizard shoes are perfect for the people they serve. Indeed, he said that the ones I have taken to them previously ‘went like hotcakes.’”

So, that’s the scoop. For most of us, comfortable walking shoes are something we take for granted. For the less fortunate, they are an absolute godsend, and even ones that look a bit bedraggled may still fit that bill.

If you want to contribute, bring your used footwear to me at any track workout, Stumptown race, or Saturday on the Grass practice. Or, contact me on Messenger or by email, at RALovett “at” AOL dot com (sorry I get too much spam to post it too directly), and arrange a way to meet. At the moment, we are headed for a below-average year. But it’s not too late to fix that, because I bet a lot of shoes are languishing in basements and garages.

Here are the stats. The most important observation is that Covid knocked us back, but it didn’t knock us out. And I might add that this project is not just for Lizards. Bowerman, JBAC, Nike pros, college runners, and anonymous racers at Stumptown have also contributed, because when push comes to shove, helping people not to have cripplingly sore feet is something we all want to be part of. Fall is always our best season. Let’s spit in Covid’s eye and turn this into a better-than average year.