A big thank you to all of the members who joined us on Wednesday, November 18, for our on-line event focused on celebrating TRL members and their accomplishments over the past couple years.  In case you missed the event, had issues joining, are suffering from Zoom fatigue, needed to wash your hair, or that was the only time you were able to sneak in your daily run, here is what you missed.

The Summer Series was comprised entirely of virtual events in 2020, but that didn’t mean there wasn’t still some fun intra-club competition.  56 men and 46 women competed in at least 1 of the 8 events in this year’s series, with at last 5 people who did all 8 of the events.  In an effort to recognize people for not only their performance, but also their participation in events, we once again determined the top ten winners by selecting the top 5 based on their overall score (best of 5 races) and then the next 5 based on number of events they participated in.  The results for the top ten men and women are below, with the numbers in parentheses being the score and then the number of races completed.

Congrats to all of our top ten winners, and everyone else who competed in this year’s Summer Series.  We have a top ten finisher hat for each of you, and will be aiming to hand those out at an upcoming Stumptown Cross race.  If we don’t connect with you at Fernhill or Pier Park, we will find another way to get it to you.

While we have almost nearly made it through 2020, one of the key parts of the member event was to recognize some outstanding member accomplishments from 2019.  A huge thank you to the nominating committee (Tiffany McClean, Susan Hay, Kristen Dedeaux, Erin Courtney, Rick Lovett, Darren Moore and Rohit Grover) for coming with deserving nominees to send out to the TRL membership to vote on.  They came up with an impressive list of members for consideration, and also did a fantastic job at the awards event of recognizing the nominees and presenting the awards. 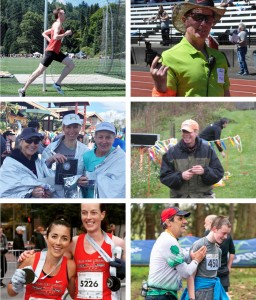 This recognition is given to the club member whose hard work and dedication resulted in significant improvements in running over the past year.  The nominees for this category included: Erin Courtney, Valerie Weilert, Garland Days, Lauren Elgee and Josie Johnson Platt.  Even though she has since left us for the sunnier and drier climate of Santa Barbara, members felt that Val Weilert deserved the award for her improvement at race distances up to the half marathon, as well as improving her time on the track at shorter races as well.

This recognition is given to a male club member whose race performance most inspired fellow club members this year.  The nominees for this category included: Chris Sheaffer, Chris Platt, Torrey Lindbo, and Riley Rex.  Based on some stellar performances on the track, as well as some outstanding racing during last year’s Stumptown Cross series, the members felt Chris Platt’s performances were particularly inspiring.

This recognition is given to a female club member whose race performance most inspired fellow club members this year.  The nominees for this category included: Betty Wagner, Suzanne Ray, Casey Hire, Leah Brown, and Jeanette Groesz.  As acknowledged by Susan Hay when introducing this award, this list includes some powerhouse women, especially if you consider their age-graded performances.  While they are all inspiring, members voted to recognize Betty Wagner with the award. As an age division champion on the national stage in longer events, particularly the 50k, Betty was extremely gracious in acknowledging the achievements and contributions to women’s running from all of this year’s nominees.

This recognition is given to a club member who, through their volunteer support of Team Red Lizard events, has demonstrated a deep commitment to enriching the local running community.  The nominees for this category included: Lou Karl, Mark Mochon, Linda Wabs, Jeff Malmquist, and Carre Heineck.  The award vote was a tie, so two very deserving Lizards were recognized for their service – Mark Mochon and Jeff Malmquist.  Both Mark and Jeff have contributed to the club in many ways over the years – they have been on the board, have been group run leaders (I know… what are “group runs”?), key volunteers at Special Olympics, aid stations, and most other events the club has been involved with over the years.  In particular, Jeff’s organization of Stumptown Cross volunteers has been invaluable, and as one of the original TRL members, Markiemo has been an icon at group runs and events from the beginning until the pause we are currently on for all club events.

This recognition is given to the club member who most embodies the mission of Team Red Lizard: to promote the running and multi-sport community by offering a training, racing and social network to assist athletes of all abilities in achieving their fitness goals.  The nominees for this category included: Julia Gullikson, Gregg LeBlanc, Tricia Opgenorth, and David Buczkowski.  The award winner in this category was Gregg LeBlanc.  Members recognized the positivity and encouragement Gregg pours into running and specifically pacing.

Congrats to all of our 2019 award nominees and winners!  There is an engraved stein being shipped to all of this year’s winners that you should receive in the next week or so.

Now that 2020 is coming to a close, who will we be recognizing for this year?