Perspectives of Growing up Indian American in Beaverton

“What type of Indian are you – the dot or the feather?”

This question that a patient asked her in graduate school is what stands out in my mind after my interview with Bhavana Reddy. While there isn’t an issue with being genuinely interested in someone’s background, skin color, or religion – or even wanting to have a discussion about race – there are definitely more respectful ways to frame the question. 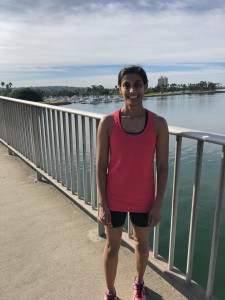 While Bhavana refused to dignify her patient with a response, she did share some of her experience growing up as a first generation East Indian in our “Moving Forward Together” series. I suppose that I may have just answered that poorly framed first question. “The dot” is called a bindi, and while there are multiple reasons that people from Hindu culture wear one, a red bindi on a woman’s forehead usually signifies that she is married.

For those who don’t know Bhavana, she has been an active TRL member for more than a decade. Having joined some group runs back in 2008, she became a member in 2009, with the goal being to find a group of people to run and train with. While her attendance at group runs has decreased due to becoming a mother a couple years ago, plus the current pandemic, she still enjoys running with (socially distanced, of course) and communicating with close friends she has made through TRL.

Fun fact #1: Bhavana was on the TRL board for 2 years as a co-director of apparel. She remembers getting some gray pullover hoodies as her greatest accomplishment in that role.

Fun fact #2: Most people are probably aware of the fact that Bhavana met some guy through TRL that she eventually got married to. While Raghav has his own TRL story (and sadly, probably some stories related to racism), the critical aspect for this story is that as another Indian American, their daughter shares many of the same physical characteristics they both have.

And why, you might ask, do physical characteristics matter? Well, they don’t. Or at least they shouldn’t. But the racism and intolerance that has always existed in this country seems more obvious or magnified since 2016. Even growing up in the mostly white suburb of Beaverton, Bhavana said she didn’t experience a lot of overt racism growing up. She mostly experienced micro-aggressions. She knew she was different and didn’t have a lot of other people who looked like her. Diversity in her neighborhood consisted of her family and a black family that lived down the street. There were a couple other Indian kids in grade school, and several in high school whom she is still close friends with. This small network was critical for them so they could share their experience with one another, as they felt their parents were immigrants so couldn’t understand what they were dealing with.

Or perhaps they did, and just didn’t talk about. One of the first examples of racism that Bhavana remembers was being middle school aged and going shopping with her mom. She recalls a group of boys pointing at their foreheads mocking the bindi that her mother wore. While her mother just ignored them and never discussed the event afterward, it was something that left an impression on her. That type of overt racism is something that may have seemed infrequent when she was in school, but is something she says she fears for herself, her parents, and now her daughter since the 2016 election.

Obviously racism isn’t something that came about during the last presidential administration. But the news was full of increased reports about racist incidents across the US following the election, and it was the first time she says she ever felt unsafe in this country. Memories of some unpleasant things people said came back to her. While she was born here, her parents were immigrants, so she worried how they would react if told to “go back to your country.” She also wondered if she might be told to go back to her country. Whether big trucks with flags or Trump bumper stickers actually mean the vehicle operators are racist, the fear was (and is still) enough to make Bhavana not pull up next to such a vehicle when driving around town.

In 2017, two men were killed, and a third seriously injured, on the MAX when trying to defend a couple Muslim girls who were being verbally harassed. This incident resonated strongly with Bhavana since her father uses the MAX to commute to and from work each day. The fear she has for her parents, and now for her daughter, are what concern her most.

While she describes herself as somewhat religious, there are some important aspects of culture tied between being Indian and Hindu. Keeping those traditional ties is important. For example, there were a lot of traditional Hindu customs that were part of their wedding ceremony. Besides her parents, there is also a larger tight-knit Indian community that they rely on locally, since some of their extended family is still in India. This network is particularly important as they raise their daughter in a world where they want to protect her from ever experiencing racism, but also want to ensure she is not ashamed of or forgets her roots. While Bhavana admits there was a time she was ashamed of being Indian, it was helpful for her to have a network of friends of color to help navigate this world and validate her feelings – she hopes her daughter will find a similar network of friends to connect with. Before she even reaches school age, one important cultural connection happening already is that her parents are starting to teach their daughter their native language.

She shared with me that in the 11 years she has been a TRL member, she has never felt any racism, or even micro-aggressions, within the club. While the resurgence of protests and discussions surrounding race have made her more aware of the lack of diversity within the club, she feels that the actions we are taking as an organization are what is needed to make us welcoming to others. Listening. Understanding other’s experiences. Sharing thoughts. It is our intent to keep doing that, so if you have a perspective you would like to share, please contact either Torrey or Garland.