Fall is in the air, which usually means a bunch of crazy runners show up to Portland Metro area parks to run across wet grass or soft surface trails in an effort to see how they stack up against the competition.  And for many, it is more about the comradery and team pride.  Whatever it is that usually motivates cross country lovers, they were still out in force, even without a single starting gun to set them into motion.

While we can all hope that 2021 brings a return to the way we usually run XC, I feel like the first race at Mary S Young Park got the season kicked off pretty well.  This course borders on a trail race, versus a traditional XC race, especially since we didn’t have the usual start and finish across the grassy field.  But there were still some stellar performances, as indicated by the standings for the Strava segment.  This was an existing segment that had been around for years, so I can only imagine the dismay the former “crown” holders felt when they started getting notifications about losing their segment.  In the end, it looks like 49 men ran faster than the previous CR holder, and 24 women beat the former women’s CR holder.  I thought it was pretty fun looking at the leaderboard results and seeing all of the fast times on the single loop segment from primarily Friday, Saturday and Sunday of this past weekend. 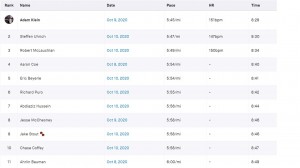 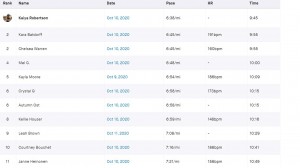 So the virtual version of Stumptown Cross has already made a mark in the running records according to Strava.  What’s even more impressive is that there are several people who raced that don’t even use Strava, so there are even more fast results stored in Garmin Connect or other places.  If you haven’t yet checked out the results, here are the standings for race #1.

As we start thinking ahead to race #2, and the rest of the series, I wanted to note a few things:

So there you have it, the plan for the next couple months of virtual racing – Stumptown style.  While it may not be head-to-head, I have a hunch that most Friday, Saturday and Sundays at each venue are going to look a bit like what I witnessed – lots of people out racing around the park on their own, or in small groups, but around the same time as others who were doing the same thing.  And I have to say, it was kind of fun to get to see other people racing that are often in the same race we are in ourselves (in a normal XC season).  So I know that I personally enjoyed getting to not just watch the women’s race, but I actually got to see others who typically finish in front or behind me racing by as I was out warming up and cooling down.  Perhaps one of the unforeseen benefits of 2020 being a different kind of year?  Hey, we need to find the silver lining in things somewhere, don’t we?

If you missed out on race #1, but still want to join the fun, there is still plenty of virtual racing to come.  At only $10 for the series ($5 for TRL members), you can’t go wrong – even if you are only able to hit a few of the races.  With team pride on the line, how can you just just sit by and watch from the virtual sidelines?  OK, that’s a rhetorical question, since I am pretty sure that if you want to actually watch the XC racing from the sidelines, it will probably be a never-ending stream of people running the course if you show up at one of the parks between 8am and noon on the Saturday of any race week window.  Looking forward to seeing some of you out at the park or in the Strava standings for the next event!